Special thanks to Phil Plait (the Bad Astronomer) for linking to my pictures and thereby doubling my all-time pageviews overnight! As a reward to all the BA faithfuls, I have posted a few of my earlier night sky images. Sorry if they don't quite live up to the Quiver Trees by Night series, but I am still learning. On the other hand, I have finally overcome some hugin glitches (by installing it on another machine) and managed to stitch a third Quiver Tree by Night panorama. Now it will need some heavy photoshopping, for which I don't really have time at the moment, but I will post it when it's done.

The above shot was taken at Nuwerus, a guest farm in the Cederberg, in July 2011. These are the most Southern quiver trees I've ever seen. It was taken in moonlight (about 35% full), which is why the foreground is so well illuminated. This shows nicely that moonlight is actually the same colour as sunlight, just darker. Actually, the moon was already too full in this image, so I had a hard time extracting enough contrast from the night sky. I had actually made a similar panorama the night before, when the moon was still darker - but the next morning my memory card died and took all my pictures with it! Thus, I retook the panorama that evening, and this is the result. The lesson is: never buy discount memory cards - stick to the well-known brands, even if they are more expensive. At least this image won me a nice little camera backpack from Pix Magazine.

Above are two startrails I took that same night. The first is moonlit, the second was taken in the early morning hours, after the moon set, but the sky started getting light towards the end. This is the celestial South pole you're seeing, of course, so you will also notice the two Magellanic Clouds. The quiver tree in the foregound was illuminated with my flashlight. These are long, single exposures, which unfortunately leads to some hot pixels in the image. One can cancel those with a darkframe subtraction, but the darkframe would have to be a similar exposure length - and I didn't have the time for that. An alternative is to take many shorter exposures and then to merge them, using software like Startrails.exe.


This shot is another moonlit panorama, also taken in the Cederberg, but at Beaverlac. Later that night I took some startrails (after the moon had set), fell asleep next to my tripod, and was woken by an otter :)

Here is my first successful night sky photo, taken in the village of Antsiraraka in Madagscar, July 2010, with a baobab in the foreground. I shot at ISO 1600, which turned out not to be enough, so I had to push the exposure in postprocessing. The result is inferior to shooting at ISO 3200 directly.
Posted by Florian Breuer at 08:17 2 comments:

The Image Says it All

Great news, I am taking part in an exhibition at the Exposure Gallery at the Old Biscuit Mill in Woodstock, Cape Town. It is called "The Image Says it All", and features twenty photographers, with one photo each. The opening is on Thursday 25 October, and it runs until 21 November. 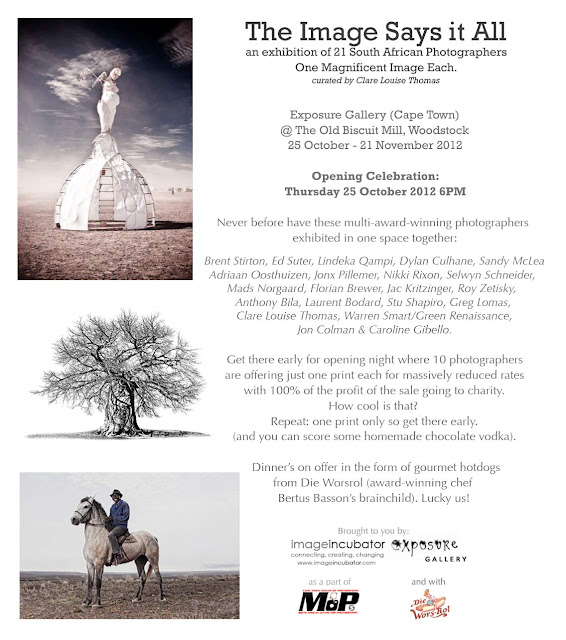 Okay, so my name is misspelled, but it still means the same thing :)

My entry is Quiver Trees by Night 2, which looks beautiful printed 1m wide and framed. If you buy an unframed print of this at the exhibition, the proceeds will go to charity.


Another of my pictures, a large canvas of Red Giants, is also for sale at the gallery. My heartfelt thanks to Linda and Antonio, who run the gallery and have been supporting me!

Posted by Florian Breuer at 08:05 No comments: