Sorry for the long absence, I have been rather busy at work and also travelled to Europe recently. It's high time for another blog post. So here's a nice photo of the moon setting over the Garub Plains in the Namib, taken early one windy morning during the wonderful Aus workshop I have been going on about.

This was taken with my Tokina 400mm f/5.6 lens, which I had taken along to photograph the horses. This lens is really nice to use, and surprisingly good value for money: I paid R2000 for it, second-hand, and it's optically quite good, at least if you stop down to f/8 or so.

As I said, it was a windy morning, so even though I mounted it on a sturdy tripod, the wind caused the lens to vibrate a bit, so this exposure is a little soft. The moon itself is even more fuzzy, since you are seeing it through the thickest part of the atmosphere.

What more is there to say? Oh, yes, it needed some photoshopping, because the original shot looked like this: 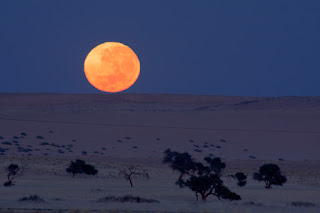 So what's wrong with this? First, there is a telephone cable bisecting the image. It's not that obvious, but once you've seen it, it gets on your nerves. Second, there is something distracting in the bottom left corner, right on the edge. Normally, one would just crop a bit, but that would move the trees in the bottom right too close to the edge. What to do?

Wicus Leeuwner taught me the trick: use the Free Transform tool in photoshop to stretch down the bottom left a bit, until the distracting bits are off the edge of the photo. I actually used Puppet Transform, because it's more fun to use: 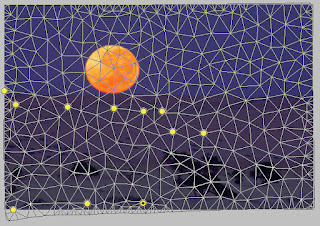 The yellow pins under the moon are to ensure that the moon itself doesn't get distorted, while the three pins at the bottom left got pulled down a bit.

Finally, the telephone cable was removed by selecting it and hitting "delete" to call up photoshop's smart Content Aware Fill. This basically replaces the deleted portion by patterns cloned from other parts of the image that fit in well. It's surprisingly good, and if you don't like the result, just hit delete again and again until photoshop serves up something you like. The one annoyance is that this only works if you have only a single layer. Beats me why. Of course, cloning by hand works just as well, but that's soooo low-tech...
Posted by Florian Breuer at 20:59

Email ThisBlogThis!Share to TwitterShare to FacebookShare to Pinterest
Labels: Namibia