Come join me in Namibia!


Here is the big news I alluded to last time: I'm going to the Aus Photography workshop, held at Klein Aus Vista in Southern Namibia, 5 - 11 June 2016. This time, I'll be going as an instructor, specifically to teach night photography under the leadership of Wicus Leeuwner and JJ van Heerden. Read on to see what you can expect at the workshop.

I went to this workshop as a student in 2012, and photographically, it was the best experience I ever had. The photos in this post were all taken during that trip, though the night photos were actually taken at the Quiver Tree Forest near Keetmanshoop some days before the workshop, since the 2012 workshop was timed to coincide with the full moon.


Early in the evening the moon was 90% illuminated, but quite low in the sky, so some stars were visible, while the moon illuminated the quiver trees in the foreground. Moonlight is the same colour as sunlight, just 18 stops or so dimmer, so daylight white balance will make the landscape look quite normal - except for the long exposure and the stars in the sky.


Later that night, after the moon set, the Milky Way was up in its full glory. In June we can see towards the centre of the Milky Way, which is the most spectacular part. Here I illuminated a quiver tree with my torch, but because I only had a white LED torch, its light is far too cool to produce a pleasing colour at any white balance which makes the sky look good. Ideally, one should take a daylight-coloured torch, perhaps an old-fashioned one with a halogen bulb.


That same night, I took the three full-sky panoramas that I have written about so much.


Of course, night photography will be only one attraction at the workshop (which will this time coincide with the new moon). Arguably the main attraction of Aus are the feral horses, which have lived in the area since the end of the First World War. They rely for survival on an artificial water hole maintained there for their benefit.

These horses have lived feral for many generations, and it is fascinating to watch the interactions between members of a herd. They are not shy, however, and come close to investigate the people photographing them.

Southern Namibia has some of the most spectacular landscapes on Earth. Aus lies on high, rocky terrain, which soon sweeps down to the Garub plains, a gravel desert that extends some 100km westwards to the coast. An amazing viewpoint over these plains is at God's Window, see the image at the top of this post.

A few hours drive to the north, one reaches the red dunes of the Namib Desert, the oldest desert on Earth, whose fauna and flora have had millions of years to adapt to the harsh conditions.


Just outside Lüderitz, this is the ghost of a mining town, built during the diamond boom of the early twentieth century. It was spectacularly wealthy and advanced (it boasted one of the first x-ray machines in the Southern hemisphere - to image smuggled diamonds, rather than broken bones), but was abandoned in the 1950s. Since then, the desert has been reclaiming the houses one sand dune at a time.

I hope you'll be able to join me at the workshop. If you do, or manage to come here on another occasion, here are some tips of what to bring with you.

1. A spare camera body. This is not somewhere one gets to every day, how sad would it be if your camera packs up at the beginning of the workshop? For that reason I strongly recommend bringing a spare camera body as a backup. Remember also that the desert is quite a harsh place, and although your camera is unlikely to get wet, you do want to avoid getting sand in it, especially when you change lenses. The second reason to have a spare body is that you can then have two different lenses mounted, and can quickly change focal length without taking any lenses off your camera.

Your spare doesn't have to be as fancy your main body (older, second-hand bodies should be affordable online), but if its control layout is the same as your main body, then you'll have a much smoother experience.

2. A telephoto lens, mainly for the horses, but there will be opportunities to photograph other wildlife too, such as Gemsbok, ground squirrels, birds, etc. A 100-400mm zoom is good, longer is even better, if you can afford it. I can't, so all I have is the venerable Tokina 400mm F/5.6 lens, but I found that it produces pretty good results, especially stopped down to about F/8 or so, and it's ridiculously cheap. Contrast is a bit low, but that can be fixed (somewhat) in post-processing.

3. A large-aperture, wide-angle lens, for night photography. You want the spectacular night sky in your shot, so you need a wide angle. There is very little light, so you need a large aperture. It's very hard to autofocus at night, so ideally you also want something whose focus ring has a hard stop at infinity, or at least an accurate infinity mark. Since you'll be shooting wide open, accurate infinity focus is really important. My lens for this ideal: the Tokina 11-16mm F/2.8. It's optically excellent, even wide open, and it has an accurate hard stop at infinity on the focus ring. Now, if it were 1-3mm wider, it would be even better.

In the day-time, you'll be using the same lens for sweeping landscapes and indoor shots at Kolmanskop (here a tilt-shift lens would be great).


4. A medium telephoto lens, 70-200mm is ideal. This can be used both for horse portraits as well as a wide variety of landscapes.

5. There are always opportunities for a macro lens as well, although you don't want to carry too much on your back, so a clip-on macro-adapter, such as the Raynox DCR 150, on your medium telephoto lens works pretty well. 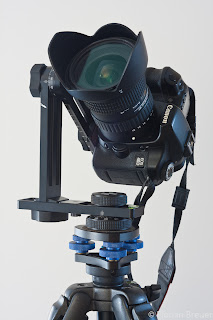 6. A sturdy tripod is a must. You'll be taking long exposures at night, potentially several hours if you're doing star trails, and there might be some wind. Forget the super-compact travel tripods with their spindly legs - heavier is better.

A nodal-point adapter is pretty useful (but not essential) when taking panoramas, which you'll need to do if you want to capture more than just a small piece of the Milky Way.

A cable release is also essential, and a fancy one that acts as an intervalometer will be quite useful for star trails, but again, is not essential.